This book is, as the title indicates, devoted to an analysis of the growth miracle of capitalism. It is a blend of verbal discussion 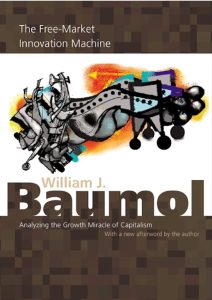 and formal analysis. Although the book also contains some material that is historical in character, considering for instance the question of why earlier (pre-capitalist) economic systems failed to generate growth comparable to that of capitalism today, the main focus is analytical. Three topics emerge as particularly central. The first and arguably most important of these is the analysis of how growth is created and sustained. This is discussed in the first and last of the three sections of the book. As the title indicates, the author holds innovation to be main factor behind economic growth. Second, the book contains a discussion of why capitalist firms engage in various forms of technology sharing and exchange, a practice that the author finds to be very beneficial for growth. This is discussed most extensively in the second half of the first section. Third, in the second section of the book, the author also considers how innovation may be integrated into standard microeconomic theory. The discussion in this section focuses on how various aspects of the innovation process may be analysed from such a (static) perspective, and how the incorporation of innovation into this theoretical structure may affect the discussion of other topics commonly considered in this type of literature, such as, for instance, regulatory issues, competition policy etc. Although interesting, the discussion in this section clearly less related to the stated purpose of the work than the remainder of the book. In the following I will focus mainly on the growth aspects.

The central argument of the book, adapted from Joseph Schumpeter (and Karl Marx), is that innovation has replaced price as the most central competitive weapon in key parts of the economy. Although it is recognized that some very important innovations may stem from small firms and/or individual entrepreneurs, it is assumed that the bulk of innovative activity is carried out by large, oligipolistic firms that compete neck to neck with each other (through constantly launching new innovations). The author compares this with an arms race, leading to long periods of relatively stable investments in R&D (as a share of production or output), interrupted by short intervals of increasing R&D, initiated by a sudden increase in R&D efforts by one of the oligopolistic firms (perhaps related to emergence of new and promising opportunities). The likely consequence is, the author argues, that the share of R&D in production or output will increase over time (though in a discontinuous manner). Since the author holds innovation (which he tends to equate with R&D) to be the main source of growth, this competitive process is in his view likely to lead to sustained, long run growth. This tendency, the argument goes, is strengthened by the common tendency of capitalist firms to engage in various forms of technology sharing/interchange, which he sees as a natural and desirable outcome of the actions of profit-seeking firms operating in (imperfectly) competitive markets (and not as anti-competitive actions as some regulators may be accustomed to think). Growth is also strengthened, the author points out, by the tendency of innovation to breed new innovations, through spillovers of various sorts. Although it is acknowledged that there may also exist counteracting tendencies to this virtuous dynamics, such as the tendency of R&D costs to rise relative to that of machinery and equipment (since technological progress is assumed to benefit the latter more than the former), the author argues that these forces are not likely to be strong enough to prevent innovation-based growth from running its course (for the foreseeable future at least).

As is well known Schumpeter did during his lifetime consider two different ways to organize innovation in capitalist firms (Fagerberg 2003). In early writings he focused exclusively on small (or medium-sized) firms, led by individual entrepreneurs, which he in this work saw as the true agents of innovation-based growth. In some of his last contributions he observed that innovation may also be carried out through what he called “collective entrepreneurship”, e.g., in the R&D departments of large firms, but he did not analyze this in much detail. He also used the term “routinized innovation” for this phenomenon. Baumol takes, as mentioned above, over Schumpeter’s distinction between entrepreneur-led and routinized innovation. But in contrast to Schumpeter, who held that technological competition was the main form of competition for all types of firms, Baumol argues that it is only large, oligopolistic firms that engage in this type of competition. This explains, of course, why the author in his analysis of capitalist growth focuses almost exclusively on this type of firms. However, it might be argued that he, by basing his discussion on this very stylized distinction, overlooks some of the dynamics that takes place between firms of different types in the process of innovation-based growth. In particular, it has been shown over and over again that, in many cases, small entrepreneur-led firms are particularly active in innovation in new and promising areas, and that they therefore play a very important role, and often a dominant one, in the early phase of a technology (before a dominant standard has emerged). As times go by, though, the competitive advantage may well shift towards larger firms. However, history is replete with examples of small firms entering an industry in periods of major technological shifts (think of the computer industry, for instance). Eventually, some such small firms may grow large, perhaps at the expense of initially larger but more inert incumbents. Thus, it might be argued that a theory of innovation-based growth needs to take into account different types of firms, their mutual interaction and selection processes (allowing some firms to grow while others may be forced out of business).

Another interesting aspect of the author’s discussion is how risk and uncertainty are treated. As is well known uncertainty is a major characteristic of innovation processes, not only in the sense that there is a distribution of different outcomes, each with a given probability (so-called “risk”), but in the sense that in many cases you simply don’t know what the outcome will be (or you are not able to attach probabilities to possible alternative outcomes). However, following Baumol, innovation that displays such real uncertainty is an activity reserved for small firms. Large, oligopolistic firms, he argues, engages in more routine-type innovation, the outcome of which is much more predictable. This is a very interesting hypothesis, but is it proven? The author does not provide much evidence. How would, for instance, the extremely large investments by large telecommunication firms in new mobile communications technology recently be explained from such a perspective? Does this look as a “moderately predictable” environment, as the author assumes? At least to this reader, an even-handed reading of the literature seems to suggest that real uncertainty is a fundamental characteristic of technological development, which all firms, large or small, have to face.  Although there may well be some differences across firms of different types and sizes in the ability to innovate, compete and gain economically, these differences may equally well be due to other factors (such as the ability to secure finance for new innovation projects or successfully commercialise innovations). Such differences are also likely to vary between sectors and industries (and over time).

Furthermore, it might be argued that the author takes it a bit far when he states that virtually nothing has been written before him on the subject of this book (apart from, as he  admits, four pages by Marx&Engels and six pages by Schumpeter!). Although the author clearly recognizes valuable contributions from economic historians such as, for instance, Nathan Rosenberg, in this area, these contributions are said to be more concerned with the creation of the capitalist growth machine than how it actually works (which is the topic the author has selected for himself). After, in this way, having eliminated the historians, Baumol goes on to argue that the contributions from other growth theorists, such as, for instance, Paul Romer, also fall in a different category than the author’s own work, since these models allegedly are ahistorical in nature. Moreover, the author simply states, without further justification, that there is also a number of other contributions that despite their valuable character are characterized by “central concerns … different from mine” (p. xi). Hence, following the author, apart from a few remarks from the grand masters of the past mentioned above, only the author’s own contribution can be said to be directly to the point. To this reader, this seems to be an exaggeration. For instance, the writings of an economic historian such Rosenberg are as much concerned with the actual working of the “capitalist innovation machine” as with the historical process that led to its creation. To realize this, see for instance the justly famous essay on innovation by Kline and Rosenberg (1986). Moreover, although there may be something to the statement that “new growth theory”, as indeed almost all formal models of economic growth, lacks historical depth, Baumol’s own model does not seem to depart significantly from the rest of the literature in this respect. It is a rather abstract model, based on a very stylised view of capitalist dynamics, and it totally fails to explain, in formal terms, how this dynamics have evolved historically (nor does it do any attempt to do so). Finally, the author does not even cite the many European researchers, with Christopher Freeman of SPRU as the leading figure, who over the years has contributed extensively to our knowledge of the relationship between innovation and economic growth (see Fagerberg (2003) for further details).

This being said, the book is an interesting and original contribution to the literature, which many readers will find of interest. In particular, the author should be complimented for his fact-finding approach, and willingness to adjust theory and modelling to what he sees as the central evidence. If anything he could have gone further in that direction since, at several occasions, he notes that evidence seems to point in directions that he is not himself pursuing, For instance, in his discussion of technology interchange across firms, he notes that managers report that the perhaps most important reason for this has to do with the tendency of researchers to interact closely with colleagues in other firms, a fact that the managers according to the author reluctantly have had to accept. This may be taken to reflect a fact that is widely recognized in the relevant literature, namely that innovation in most cases is not an isolated event in a particular firm, but depend on interaction between a large number of actors in the private and public sectors. Notions such as “innovation systems”, “technological systems”, “communities of practice” etc., used extensively in the relevant literature, reflect these findings, which might be expected to have important implications for theorizing and modelling in this area. Although some of this literature is on the borderline of economics, or in neighbouring disciplines such as economic sociology, economic geography or management, this is not an excuse for ignoring it, as is in fact done by the author. In my view, the discussion in the book could have been greatly enriched, had the author showed a greater willingness to learn from areas of research that may be (slightly) different from his but still very close to his topic.

Fagerberg,  J. (2003) Schumpeter and the revival of evolutionary economics: An appraisal of the literature, Journal of Evolutionary Economics, 13: 125-159