A Guide to Schumpeter

Josef Schumpeter was born in 1883 in the then Austrian empire and died in 1950 in the United States. He grew up in Vienna around the turn of the century and studied law and economics there. During the early part of his career he tried his luck both as a business-man (director of a bank) and as a politician (minister of finance) without much success, and it is as a writer and social scientist that we remember him today. He became professor at the University of Bonn in 1925 and later at Harvard University in the USA (1932) where he stayed on until his death. 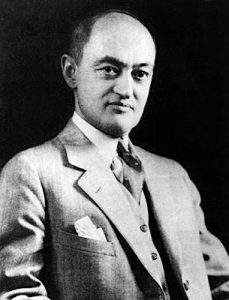 change, focusing in particular on the crucial role played by innovation and the factors influencing it. In so doing he distanced himself from the (then) emerging neoclassical strand of economics, because it in Schumpeter’s own words assumed that “economic life is essentially passive … so that the theory of a stationary process constitutes really the whole of theoretical economics … I felt very strongly that this was wrong, and that there was a source of energy within the economic system which would of itself disrupt any equilibrium that might be attained” (Schumpeter 1937/1989, p. 166). It was this ‘source of energy’, innovation, that he wanted to explain.

His major theoretical treatise on the subject, “The theory of economic development”, published in German in 1912 and in a revised English version in 1934, focused in particular on the interaction between innovative individuals, what he called ‘entrepreneurs’, and their inert social surroundings, while later works, particularly “Capitalism, Socialism and Democracy” from 1942, extended the approach to also take into account organized R&D (Research and Development) activities in large firms. This brief note outlines some of the main elements of his approach.

Schumpeter’s theorizing was inspired by the main approaches that he encountered as a student in Vienna around the turn of the century, namely Marxism, the (German) historical school in economics and the (emerging) neoclassical strand. From Marx he took the dynamic outlook, from the historical school the emphasis on historical specificity and from the neoclassicals the need for a micro-based approach, in which evolution is explained through the interaction of individual actors, rather than, say, at the level of the nation or the state.

In “Capital” Marx had suggested that the main way for capitalist firms to keep competitive was to increase productivity by introducing new and more efficient machinery. Firms that succeeded in introducing new and more efficient technology would see their competitive position improved (and hence be rewarded by above average profits), while those who failed, Marx argued, would be unprofitable and, eventually, driven out of the market. Schumpeter essentially adopted this argument and made it the centrepiece of his theory. For him, this (technological) ompetition was the true nature of capitalist competition, in contrast to the so-called “price competition” envisaged in traditional text- books:

“ … in capitalist reality as distinguished from its textbook picture, it is not that kind of competition that counts but the competition from the new commodity, the new technology, the new source of supply, the new type of organization (…) – competition which commands a decisive cost or quality advantage and which strikes not at the margins of the profits and the outputs of the existing firms but at their foundations and their very lives. ” (Schumpeter 1943, p. 84)

As is evident from the quote, compared to Marx’ writings Schumpeter broadened the perspective from focusing mainly on cost-cutting through introduction of new machinery (so-called process innovation) to include other types of innovation as well (product innovation, organizational innovation etc.) Schumpeter also departed from Marx by making an attempt to develop a theory of innovation. First of all he added a definition of innovation (or “development” as he initially phrased it) as ”new combinations” of new or existing knowledge, resources, equipment and so on (Schumpeter 1934, pp. 65). Second, he pointed out that innovation needs to be distinguished from invention. The reason why Schumpeter stressed this difference is that he saw innovation as a specific social activity (function) carried out within the economic sphere and with a commercial purpose, while inventions in principle can be carried out everywhere and without any intent of commercialisation. Thus, for Schumpeter innovations are novel combinations of knowledge, resources etc. that are attempted commercialized (or carried out in practice).

This “combinatory” activity he labeled “the entrepreneurial function” and the social agents fulfilling this function “entrepreneurs”.For Schumpeter these are key to innovation and long run economic change. One main reason for this was in his view the prevalence of inertia, or “resistance to new ways” as he phrased it, that entrepreneurs had to fight to succeed in their aims. He described their situation vividly as follows:

“It is not objectively more difficult to do something new than what is familiar and tested by experience, but the individual feels reluctance to it and would do so even if the objective difficulties did not exist. (…) Thought turns again and again into the accustomed track even if it has become unsuitable and the more suitable innovation in itself presents no particular difficulties. (…) In the breast of one who wishes to do something new, the forces of habit raise up and bear witness against the embryonic project” (Schumpeter 1934, p. 86).

Thus, following Schumpeter, there are many factors, working at the individual, group and social level that make it a very challenging task to succeed in innovation. The problem is not so much with the new ideas, which may be simple enough to comprehend, as with their successful economic implementation. To overcome this strong “resistance”, Schumpeter argues, more than the ordinary managerial competence is required. It is this “special quality” that he in his early work associates with entrepreneurs. In his early work, what is sometimes called “Schumpeter Mark I”, Schumpeter focused mostly at individual entrepreneurs. In later works he also emphasized the importance of innovation in large firms (so-called “Schumpeter Mark II”), and pointed to historically oriented, qualitative research (case-studies) as the way forwards for research in this area (Schumpeter 1947, 1949).

The decades that followed Schumpeter’s death interest turned away from the dynamic outlook that characterizes his work. Instead economists gradually adopted static, mathematical equilibrium approaches of the type that Schumpeter admired but had found to be of little value for understanding the subject matter. However, more recently the tide has changed, and today the need for understanding the causes and effects of innovation is generally accepted and so is Schumpeter’s role as the main theorist in this area. Arguably, his contribution is as relevant as ever.