Freeman and Louçã: “As Time Goes By”

This is an unusual book, and a very important one, too. It addresses „big issues“ such as the (theoretical) sources of the evolutionary approach, and how this approach might be developed in understanding how the economy evolves through time. As if this were not enough, it also offers a detailed analysis of how the global capitalist system has evolved from the time of the industrial revolution to the present.

The book is divided into two quite distinct parts (but – as we shall see – with a strong connection at a deeper level). The first, 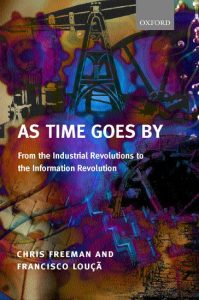 entitled „History and economics,“ is the theoretical part.  It analyzes the role of history in economic analysis (and in economic history in particular), discusses Schumpeter’s view on the subject, and presents and analyzes the works of Kondratiev and other long-wave researchers.  It is argued that Schumpeter’s theorizing was a bit paradoxical in nature since it was based on a simultaneous acceptance of equilibrium economics („the circular flow“) and non-equilibrium dynamics („development“). The authors stress, however, that Schumpeter himself confined his work to „development“ and that he held the historical element to be crucial.  The first part concludes by outlining the authors’ approach to long run economic and social change that they – following Schumpeter – label „reasoned history“.  The second part of the book applies this perspective to long run economic and social change. Capitalist development from the time of the industrial revolution to the present is identified through „Kondratiev Waves“, five in total, each of which is analyzed in a separate chapter.  This part (as the preceding one) also contains a separate introduction and conclusion, presenting the scheme of analysis in more detail, and focusing on some of the more general features that emerge through the discussion of the various „waves“.  All this appears very well done, and there certainly is a lot of interesting stuff here for readers with quite different interests.  Instead of going into more detail about the content of the various chapters, I will in the following attempt to present some of the general ideas and lessons that emerge.

The book starts out by discussing the relationship between biological evolution, social evolution, history, and economics.  Evolution in biology, it is argued, is understood as an open (unpredictable) process, characterized by surprise, change, mutation, bifurcation, feedback, and crisis.  It is an irreversible process; the arrow of time cannot change. Social evolution, the authors argue, shares many of the same basic characteristics of openness and indeterminacy, but adds a new dimension of intentional choice.  Hence, in the view of the authors, there is a qualitative difference between biological and social evolution that makes any simple transplant of biological metaphors to the analysis of social developments methodologically suspect.  On this point, they side with Schumpeter, who was very critical towards attempts to apply perspectives or methods developed within the natural sciences to the analysis of social phenomena.

As noted, the authors follow Schumpeter in defining economics as a historical science.  The subject matter of economics, they argue, is intelligible only as „contextualized history“.  However, although every historical incident is in some sense unique, economic evolution is (and here we see an endorsement of the work of Sombart) also postulated to have „recognizable patterns“.  In particular, the authors argue that each capitalist epoch or „wave“ can be analyzed as the interplay (co-evolution) between different sub-systems.  They identify five such systems, namely science, technology, economy, politics, and culture, each with its own dynamic.  This generates the possibility of mismatch between the various systems and, periodically, „radical institutional innovation“.

Although the authors postulate that they do not give primacy to any of these five systems, it is nevertheless true that the „technological system“ plays a very important role in their account, perhaps because it is in this field that the authors have been able to detect some of the most stable „recurrent patterns“.  One such pattern is the life cycle of a technological system, which the authors divide into six phases starting with the „laboratory-invention phase“ and ending with „maturity“.  Neither the early nor the late phase has major impacts on the economy, it is argued.  Rather, it is in the intermediate phases, when the technological change is very rapid (either through displacement of older technologies or through caring for new needs, or both) that the economic effects are most manifest.  The authors hold that, compared to Schumpeter, they put more emphasis on diffusion (which is assumed to yield the major economic effects) and less on the dating of innovations.  They are also less concerned with „the heroic entrepreneur“, who they tend to see as an ideological figure.  Instead, they put more emphasis on organization and management (and changes in management systems).

The authors are of course acutely aware of the fact that not all technological systems have equally pervasive effects.  Some, however, may be very important, such as ICT.  The analysis of such effects in the book is based on an approach, initially suggested by Perez, that distinguishes between:

The authors associate this dynamic with the alleged phenomenon of „long waves“, the discussion of which is an important part of the book.  I am not going to discuss the various pros and cons of this approach here.  Suffice it to say that they do not adhere to the argument that long „waves“ needs to be verified by aggregate economic statistics (which arguably would be a challenging if at all possible task).  Rather, what they focus on is the qualitative aspect, i.e., qualitative changes that take place in historical time.  This, however, implies that one may suggest different schemes (periods) depending upon which qualitative features one chooses. They note that there is a different way to look at this, one associated with the works of, among others, Chandler and von Tunzelmann (three industrial revolutions), but do not discuss the merits (or lack of such) of these alternative approaches in much detail.

This is a very good and important book that is must reading for anyone interested in evolutionary economics and/or the relationship between history and economics.   In addition, you get a very well documented and argued interpretation of long run capitalist development from the industrial revolution to the present that will be a standard reference (and that probably will provoke a lot of discussion).  However, and of no less importance, it also provides a first rate contribution to the discussion of how evolutionary economics should (may) develop.  For instance, it makes a number of important points on issues such as social and biological evolution, history and economics and system-thinking/applications that deserve a central place on the evolutionary agenda in the years to come.

Chris Freeman and Francisco Louçã: As Time Goes By. From the Industrial Revolution to the Information Revolution. Oxford University Press 2001, 407 pages, ISBN 019-9241074.