Vaclav Smil has over the years published a large number of books, mostly on energy, on which is he is regarded as a leading 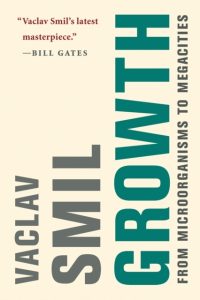 expert. His books have received wide acclaim, among others from Bill Gates, who has said that “there is no author whose books I look more forward to than Vaclav Smil”.

The present book focuses as the title indicates on growth of just about everything, including nature, energy, technologies, artifacts, populations and societies, drawing on a very large and varied literature (the list of references covers a hundred pages, Smil is certainly a learned scholar). In each case the methodology consists of fitting the evidence to a growth curve, being linear, exponential or sigmoid. The latter covers cases in which the phenomenon under study first grows slowly, then very fast before growth eventually peters out (perhaps followed by decline), what is often called an S-curve, well known from epidemiology or diffusion studies. According to Smil many of the phenomena considered in the book fit such a trajectory, i.e., they do not grow without limits but are constrained by environmental or other factors.

On this background it is perhaps not surprising that Smil is not very comfortable with the idea of unbounded (exponential) economic growth, common in mainstream economics. According to Smil such growth is bound to come into conflict with the finite nature of the planet’s ecosystem/ resources, as evidenced for example by the problem of global warming. Nor is he much impressed by some of the solutions that have been advocated, such as a transition to renewable energy (which at best will take a very long time according to Smil, and not be equally well suited everywhere) or a circular economy (a long shot indeed according to Smil). Hence, the only remaining solution from this perspective seems to be for economic growth to cease altogether. How that can be achieved, and what the likely consequences (challenges) may be, is not much discussed, though.