Not long ago solar energy was regarded as too expensive to be of interest for mainstream energy markets. Since then costs have declined dramatically, and the IEA – once the darling of nuclear and fossil fuel industries – now points to solar as the “king of electricity supply”. Have you ever wondered how these spectacular changes came about? Gregory Nemet  in his recent book “How solar energy became cheap” provides the story about how this happened with a particular focus on four countries, the US, Japan, Germany and China, the role of policy, and what can be learnt from the case. 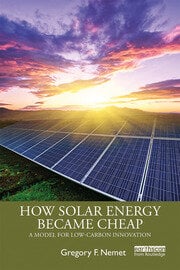 As Nemet explains, the so-called “photoelectrical” or “photovoltaic (PV)” effect, that sunrays can produce electricity when exposed to a suitable medium, has been known for almost two centuries, long before Einstein (in 1905) provided a theoretical explanation for it (for which he later got the Nobel prize). In fact, already in 1884 Charles Fritts in New York developed a working solar cell, using selenium as medium. The German industrialist Werner von Siemens was quick to point to the potential practical value of this discovery, since “the supply of solar energy is both without limit and without cost”, as he put it. Nevertheless, the efficiency of these early devices with respect to the ability to convert solar energy to electricity was very low, around 1%.  Over the years various attempts were made to increase the efficiency, using different materials as medium, and eventually silicon, which was already in use in the emerging electronics industry, came to be seen as the most promising choice. In 1954 a team from the Bell Labs developed a silicon-based solar cell – commonly heralded as the first “practical” solar cell – with around 6 % efficiency.  The path was thus set for a process of gradual improvement based on this “dominant” silicon-based design, and today the efficiency of commercially available solar cells have at least tripled compared to the 1950s. Even more important, the cost per unit of electricity – once astronomically high – has also come down to a level comparable to or (in many if not most places) below that of other ways to provide electricity.

As for many other emerging technologies, the solar energy industry in the early years was small scale and labour- and skill-intensive, making very costly products for a small group of customers with very special needs such as the space industry.  Nevertheless, in the 1970s OPEC’s oil embargo of the Western world exposed the vulnerability of  the West’s dependency on fossil fuel imports, and this led to an increased focus among policymakers in, for example, the US and Japan on alternative ways to provide energy, including – even if at the time it was considered a long shot – solar energy. In the US this resulted in a public (mission-oriented) program to improve the technology, using instruments such as R&D support, subsidies and public procurement. However, the oil price crash in the mid-1980s, reviving expectations about continuing stable supplies of cheap fossil fuel, reduced US policy makers’ appetite for continuing to fund such programs. Japanese policy makers were rather more patient, however, and continued to support the technology’s development through dedicated programs well into the early years of the new millennium. They also placed greater emphasis on realizing  the technology’s potential for providing electricity for consumers and businesses through subsidizing the installation of solar panels  (the “Rooftop Program”) combined with regulatory changes (e.g. “net metering”) aimed at making the investment more attractive for adopters.  No surprise, perhaps, that around the turn of the century, Japanese firms such as Sharp had surpassed their US counterparts as global leaders in the emerging industry.

Although prices on solar panels had come down significantly during the 1980s and 1990s, the cost per watt of electricity produced around the turn of the century was still much higher than using fossil fuels for the same purpose. This changed during the two first decades of the twenty-first century. Germany’s  push into renewable energy during this period through its so-called “Energiewende” led amongst other things to a rapidly increasing market for solar panels globally, the development of a thriving capital-goods industry – mostly in Germany – serving this industry (e.g. by supplying “turnkey” plants) and the exploitation of economies of scale, as well as continuing improvements in all parts of the value chain. However, it also prepared the ground for China’s entry into the industry, to some extent at the expense of German firms, first mainly through deliveries to the rapidly growing German market, but eventually also to the domestic market (and markets elsewhere), and today China is the by far largest market for PV and home to a vibrant industry. The German policy push, according to Nemet, drew on earlier experiences in policy-making  elsewhere,  including guaranteed price for delivering electricity to the grid  (a so-called “feed-in-tariff”), fixed for a number of years, but assumed to decrease over time through learning and other effects (for new installations). The policy did not focus on solar energy specifically but renewables more generally. However, the support-level was not identical for all installations but depended on the cost of the chosen technology. As the most costly technology at the time, this policy scheme proved to be especially favourable for solar energy, which consequently received a big boost, much more than foreseen by policy-makers and experts.

The final part of the book is devoted to the lessons from the discussion, including implications for the progress of other (low-carbon) energy technologies and, in particular, how policy may have an influence. Nemet emphasizes the modular character of the technology, and the fact that it may be applied at all scales, as important reasons behind its success, characteristics that do not necessarily apply to all other energy technologies (mainstream nuclear, for example). He also points to differences in countries’ national systems of innovation as contributing to how they affected the progress of solar energy technology at various stages of its development. Indeed, a strong emphasis on the importance of applying a systemic perspective on innovation and policies influencing it is a characteristic feature throughout the discussion in this book. Nevertheless, one aspect central to the innovation literature that Nemet draws on, but which is overlooked in his discussion, concerns the systemic relationships between different technologies in the process of long-run economic change, for example, changing from a fossil-fuel based economic system to an environmentally more sustainable one primarily reliant on renewable sources. Solar energy is central to these changes, no doubt, but so are other sources of renewable energy such as wind; technologies facilitating the integration of these intermittent sources of energy into the broader energy system like batteries, hydrogen, electrolysers etc.; and complementary changes in energy-using sectors such as transport, heavy industry and so on. Thus, while solar energy technology may be important in itself, its role is amplified when seen as part of a much broader transformation towards sustainability, involving numerous interdependent changes in technology, economic structures and social practices. This is, of course, of vital importance for policy, a central topic for Nemet, which is the reason for emphasizing it here. Perhaps his next book may delve deeper into these issues?