Innovation policy is a relatively new term. In fact, the first scholarly publications using it date back to around 1980.  Does this mean that there were no innovation policies before that time?  Not necessarily. As a social phenomenon, innovation arguably is as old as humankind itself, and public policies influencing innovation – if that is what we understand by innovation policy as Edquist (2004) suggests – may have existed for a long time. It was just called something else. This is also the way that Roy Rothwell from the Science Policy Research Unit (SPRU) at the University of Sussex in the UK, who was perhaps first academic proponent of the term, looked at it: “Innovation policy is essentially a fusion of science and technology policy (…) and industrial policy“ (Rothwell 1982, p. 3). )

Figure 1 illustrates the spread of the term “innovation policy” over time. As the figure shows the term was rarely used before 1980, and then often with a different meaning than today.[i] The notion became somewhat more common during 1980s after Rothwell and others started to promote it. However, as the figure shows, its usage only took off after the emergence and subsequent spread of the “innovation system” approach, which suggests that the two phenomena may be closely related.

Figure 1. The frequency of the innovation-policy and innovation-system terms according to GOOGLE (1970-2019)

Thus, what was new when innovation policy emerged as a central topic on policy makers’ agendas was not necessarily the various innovation policy tools (or instruments), which may have a longer history under different labels, but the new perspective used to rationalize and shape policy, what has been termed the “innovation systems” approach  (Freeman 1987, Lundvall 1992, Nelson 1993).  The new approach represented a clear break with the perspective that had dominated among academics and policymakers until then, what has been called “the linear model of innovation” (Kline and Rosenberg 1986),  which mainly focused on invention.[ii]  The innovation system approach, under influence of Schumpeterian and evolutionary thinking, looked at innovation from a much broader lens, extending far beyond invention to include e.g., implementation and diffusion, and the interaction between these various phases. Moreover, in contrast to what had been common earlier, innovation was considered as a pervasive phenomenon, relevant for all industries and sectors of society, not just select “high tech” environments.  Nevertheless, the perhaps most radical break with earlier ways to look at it was the realization, informed by decades of empirical work (Fagerberg 2004, 2017), that successful innovation does not only (or mainly) depend on factors internal to the firm but also hinges on interaction with external actors, from customers and suppliers to public research organizations. Furthermore, it was stressed that the capacity to benefit from such interactive innovation cannot be taken for granted but needs to be nurtured.

However, the interaction that takes place between firms and their environments  – the central focus of the approach – evolves along distinct paths in different national systems, influenced by variations in industrial specialization patterns, history and other factors (Fagerberg et al 2009, Fagerberg 2016). Such contextual factors complicate the task of policy learning, for example, policies that work in one context may not do so in another (Edler et al 2016). Nevertheless, at a deeper level there may still be similarities in what goes on, that may be exploited to inform analyses of innovation policy.  A common approach in the literature has been to focus on the various processes[iii] that matter for innovation and the way these interact (Liu and White 2001, Edquist 2004, Bergek et al. 2008).  As an illustration, Figure 2 identifies five basic processes in a national innovation system[iv] influencing (and being influenced by) the system’s “technological dynamics” (or innovation): 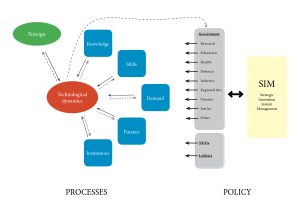 An important argument in the literature is that such processes often are complements (rather than substitutes). For example, there is little point in having access to some promising knowledge, if you do not have the skills to exploit it, the finance to do so, or if demand for what you want to do is not forthcoming. Under these circumstances, problems related to one process may be sufficient to block the entire system. Identifying and rectifying such problems, however, requires an analysis of the working of the system as a whole, which in turn depends on access to relevant analytical capabilities (Smits and Kuhlman 2004).

Another main aspect of innovation system dynamics highlighted in the figure concerns the role of policy actors (different ministries for instance), which influence the main processes in the system in various ways.[v] For example, several ministries may influence knowledge provision, and the same goes for other processes (demand for instance). Sometimes influencing a process with the purpose of supporting innovation is the main purpose of the intervention. However, interventions may also (or mainly) have other aims, such as improving health, energy security or defence.  This points to a major challenge for innovation policy governance, because there is no guarantee that interventions by different policy actors pursuing different goals are consistent with each other. Hence, to get the most out of innovation policy does not only require well-developed analytical capabilities in policymaking, for example the ability to map the potential innovation impacts. It also requires effective coordination among the various actors (Braun 2008, OECD 2010a,b, Fagerberg 2017 ). Such coordination may also enable policy makers to make connections between innovation policy and wider strategic goals for society more broadly, e.g. coping with societal challenges. Indeed, having a common vision or strategy for of society’s development may be of great help in achieving the necessary coordination in innovation policy (Fagerberg 2018, EEA 2019, Fagerberg and Hutschenreiter 2020).[vi]

While innovation may be interesting in its own right, that is not why it has attracted the interest of policy makers. What mainly concerns them is the ability of innovation to provide new and better ways of tackling issues and challenges high up on their agendas, from economic growth and competitiveness to more specific aims, such as improving health, energy security, or dealing with grand challenges. To pursue these goals various “innovation policy instruments” are applied (Edler et al 2016, Edler and Fagerberg 2017), either alone or in combination through so-called policy mixes (Flanagan et al 2011, Rogge and Reichard 2016), depending on the nature of the challenge at hand (Borrás and Edquist 2019). It is common to distinguish between system-oriented instruments (for instance supporting interaction through e.g., technology platforms), supply-oriented instruments (R&D support for example), and demand-oriented instruments or policies. Edler and Georghiou (2007, p. 952) define the latter as

“all public measures to induce innovations and/or speed up diffusion of innovations through increasing the demand for innovation, defining new functional requirements for products and services or better articulating demand.”

While many commonly used innovation policy instruments such as R&D support focus mainly on the early phases of the innovation life cycle, e.g., invention (Borras and Edquist 2019), demand-oriented innovation policy may be applied in all phases of the cycle including, importantly, diffusion, through various policy instruments. These range from using public demand proactively (public procurement for instance) to various measures intended to influence private demand (for example taxes/subsidies, standards, regulations, demonstration programs etc.).

In the early phases of the innovation life cycle, there usually are  – particularly for radical innovations –  many competing solutions, costs and prices tend to be high, and volumes of sales low (Abernathy and Utterback 1978, Kline and Rosenberg 1986). However, to make a real impact, that is, attract a sufficiently large number of customers, costs and prices of the new technologies need to come down (and quality up) to a level similar (or superior) to the more established alternatives already in place. This typically requires further innovation, exploitation of economies of scale, and the development a proper (global) value chain, all of which depend on demand. Hence, if demand for some reason stalls, the virtuous circle just described may easily abort. Boon and Edler (2018) argue, therefore, that demand-oriented innovation policies may be especially relevant to consider when it comes to supporting large scale, transformative changes in which radical innovation plays a major role, such as sustainability transitions in energy provisions and use.

When innovation policy started to become popular among policy makers, it was the potential economic effects that primarily attracted their interest.  Nevertheless, since innovation is about solving problems, it can as mentioned above also be mobilized to tackle more specific challenges. In fact, there is a long tradition for doing so, particularly in the US (Mowery 2011, Mazzucato 2013). Recently, such so-called mission-oriented innovation policies have received renewed attention (Mazzucato  2017, 2018) as ways to tackle important challenges facing humankind (and hence policy makers). A key issue in this regard is climate change. The question of how innovation – and innovation policy – can be mobilized to deal with it therefore becomes very relevant (Fagerberg et al. 2016).  However, the scale and complexity of the challenge is unprecedented (Mowery et al. 2010). Arguably, what will be needed are simultaneous (and relatively quick) changes in a whole range of technologies, sectors, and ways of life, what has been called “system innovation” (OECD  2015), for which new, bold “system innovation policies” (OECD 2015) or “transformative innovation policies” (Steward 2012, Schot and Steinmueller 2018) may be required (Geels 2014). Moreover, what seems evident is that such new, bolder policies will make the need for vision, direction and effective coordination (extending to important non-governmental actors) of innovation policy even more pressing (Weber and Rohracher 2012, Edler and Fagerberg 2017, Fagerberg and Hutschenreiter 2020).

However, while innovation policies are mostly national, their impacts may be felt all over the world. For example, new knowledge, supported by innovation policy in one country, may be exploited by firms in other countries (Keller 2010). Moreover, policy induced demand for new, innovative products in one country may provide entrepreneurs in other countries with opportunities for entering the market through exports, and hence share in – and benefit from – the rapid learning and innovation activity that characterize emerging industries.  In fact, research from the wind and solar industries indicate that the latter type of policy spillover, i.e., that demand in one country unleashes innovation activity in other countries, may be quite strong (Peters et al 2012, Dechezleprêtre and Glachant 2014).  Such global interdependencies may indeed be good news for humanity as whole, for example when it comes to the ability to deal with global grand challenges, such as climate change. However, to the extent that policy-makers focus myopically on the domestic economy (and count beneficial effects elsewhere as losses), such interdependencies may also contribute to make  innovation policies more controversial politically (Peters et al. 2012, Fagerberg 2022). Hence, successful mobilization of innovation in the support of global public goods (such as the climate) may well require the development of new forms of international cooperation in innovation policymaking (Smith 2017).

Lundvall BÅ (1992) National Systems of Innovation: Towards a Theory of Innovation and Interactive Learning, Pinter, London

[i] For example there are examples of publications from that period focusing  on “innovation policies” in specific companies or organizations (which today perhaps would been labelled “innovation strategies” or “innovation management”).

[iv] Some contributions have longer lists of processes/functions/activities but these five will usually be included in one way or another.

[v] The processes may also be influenced by non-governmental bodies (directly or via policy makers).