Economic development is a process of constant change, driven by innovation. Such changes  challenge the positions of existing firms, forcing them to adapt, but also provide opportunities that firms of all types, including new entrepreneurial ventures, may exploit. A similar logic applies to policy, not the least innovation policy. Thus, policy-making is not only about responding to problems and challenges that arise, is it is also about exploiting the opportunities brought about by economic evolution to further political goals, e.g., the transition to net zero.

Policy makers are often quite attentive to opportunities offered by large technological and economic shifts, growth of new industries etc. For example, in the 1980s Finnish policy makers correctly identified the opportunities offered by the revolutionary changes at the time in information and communication technology, and exploited these in their attempts to modernize and upgrade the Finnish economy (Fagerberg and Hutschenreiter 2020). Understanding such large techno-economic shifts, their causes, dynamics, and implications,  has been a recurrent theme in evolutionary economics, from Schumpeter onwards. What primarily characterizes large techno-economic shifts is that the radical changes they entail concern not just one but a whole range of industries and sectors, including ways of life, the organization of work, infrastructure etc.  Freeman and Perez (1986) argue that the driving forces behind such shifts are key inputs (or factors) characterized by rapidly declining costs, almost unlimited supply, and very broad applicability. Examples include oil during much of the twentieth century and microelectronics more recently.[1] However, according to Freeman and Perez, for such path-breaking changes to come to (full) fruition, a number of complementary factors need to be in place, ranging from an appropriate infrastructure to the economic, organizational and institutional set up of society, factors that policymakers may influence.  Thus, following this view, policy – and policymakers –  have key roles to play in transforming the potential benefits to society from large technological shifts into reality.

Arguably, the global green shift, currently unfolding, is a techno-economic shift of a similar (if not larger) magnitude and impact as the earlier shifts discussed by Freeman and Perez and others, centred on oil and microelectronics, respectively.[2] The green shift is driven by interaction of innovations in three interrelated areas, that is, renewable energy, energy use, and energy infrastructure, e.g., storage and distribution (Figure 1). 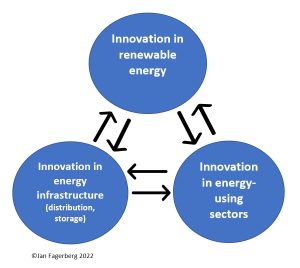 The technological revolution in renewable energy, i.e., wind and solar, has – as pointed out in the previous section – been long in the making. Nevertheless, in most settings its impact began to be felt only recently, as years of rapid technological progress and declining costs (Figure 2 ) started to make  wind and solar competitive with other ways to produce electricity, e.g., fossil fuels and nuclear. The numbers are really eye-catching. Between 1991 and 2017 the cost of producing electricity from onshore wind declined with 77 per cent.[3] The similar statistics for solar, PV module cost per watt, is even more impressive, 94 per cent. No surprise, perhaps,  that the leading energy think-tank IEA, traditionally a close ally of the fossil fuels industry, now points to solar as “the new king of electricity supply” (IEA 2020). 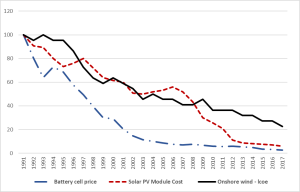 Note: The levelized cost of electricity (LCOE) from onshore wind, annual weighted average across the world, in 2016 USD per kilowatt-hour (kWh); Solar PV module cost per watt in 2019 USD; and price of lithium-ion cells(all types) per kWh in 2018 USD, 1991= 100. Own calculations on data from https://ourworldindata.org/grapher/onshore-wind-lcoe and https://ourworldindata.org/grapher/solar-pv-prices, both downloaded on February 15, 2022; and Ziegler, M. S. and Trancik, J. E., (2021a,b).

In energy-using sectors the central technological trajectory in the green shift is electrification of processes previously powered by fossil fuels, such as transport equipment, heating and cooling, as well as various industrial processes, currently the focus of a lot of innovation and experimentation. In some instances, such as in the case of cement, this may mean redesigning the entire process from scratch, while in other cases it has led to a revival for electricity-based technological paths from the early part of the twentieth century, paths that were largely abandoned (or only survived in specialized niches) due to the competition from cheap and abundant fossil fuels. This holds, as previously noted, for electric cars but also for production of hydrogen, ammonia, and other synthetic fuels from green electricity, and the use of such electricity-based fuels to power machinery, produce heat etc. However, the fact that innovation in many cases does not have to start from scratch, does not mean that further innovation is not called for. For example, if fuels derived from renewables are to power ships, airplanes etc, extensive innovation in engines, designs, and infrastructures will be required. Thus, the innovation mill will need to work at full speed in the years ahead if the goal of net zero emissions by mid-century is to be achieved.

Many initiatives to electrify machinery or processes in energy-using sectors depend on innovations in storage and distribution of electricity, whether in the forms of batteries, the capacity of which has progressed rapidly in recent years, fuels derived from green electricity, or new, digital management systems for distribution (and use) of electricity.  For example, without the massive progress in battery technology (and subsequent cost reductions[4]) in recent years, electric cars would never be able to compete with fossil-fuel driven cars in most markets. Innovation in batteries, other storage technologies, and distribution systems are also crucial for the ability to stabilize energy systems, depending, increasingly, on renewable sources, the outputs from which may vary in accordance with the weather, the time of the day, and the season.

Already Schumpeter pointed out that individual innovations, however revolutionary, are not likely to have powerful, economy-wide effects over an extended period of time (Schumpeter 1939). To have such  effects , Schumpeter argued,  constellations of different, albeit related, radical  innovations in different areas would be required.  This is exactly what happened in the first half of the previous century when the arrival of cheap and abundant oil and gas gave a powerful impetus to technological change in a whole range of sectors, e.g., electricity production, transport, chemicals, textiles and so on, as well stimulating changes in consumption patterns, distribution systems and ways of life. Today innovation in renewables is providing a similar opportunity for change. Hence, although recent technological progress in renewable energy, particularly wind and solar, is remarkable by any standard, what really makes a difference is the impetus to change that cheap and abundant renewable energy may provide in other industries and sectors. While some of those changes are well underway, others are still in the early stages, or haven’t really begun yet, for example because costs are considered too high or because there is uncertainty about the best way forwards. Arguably, policy, and innovation policy in particular, may play an important role in getting such processes on track by e.g., encouraging experimentation, supporting the development of new solutions, bringing these to market, and speeding up diffusion, through a mix of policy instruments, focusing not only on supply but also demand factors.

Around 80 % of total greenhouse gas emissions come from energy production and use.  If the technological shifts discussed above succeed in eliminating those emissions, that would be a major step in the transition towards net zero emissions.  However, to do so by mid-century would require an extremely rapid scaling up of renewable energy capacity in the years to come, and very high annual investments, several times the current level (IEA 2021). Hence, the transition would be much easier to keep on schedule if accompanied by large energy savings, for example in buildings, which currently represent about a third of global energy consumption (and more than one half of global electricity use). Thus, innovation and diffusion of energy saving technologies, such as heat pumps, and policies supporting that, are of crucial importance on the path towards net-zero. Energy and other vital resources may also be saved through increasing reuse of materials, which is another important ingredient of the shift .

A potential bump in the road for the global green shift often highlighted concerns possible scarcity of resources needed for the transformation. It is true that the supply of some minerals currently used in for example batteries (e.g., cobalt) is limited, and concentrated in a few locations world-wide that may give reasons for concern. Thus, if current production-methods are kept unchanged, a resource constraint on the global green shift seems likely.  Nevertheless, such constraints can to a large extent be mitigated by innovation, e.g., by substituting scarce inputs with other, more readily available alternatives, and such innovations are in many cases well underway already. For instance, cobalt-free batteries for electric cars are reported to be just around the corner[5]. Moreover, value-chain innovation, leading to greater reuse of resources (i.e., circular economy) as well as energy savings, is another promising path, for which policy may have a large say.  For example, the European Commission has recently proposed a new regulatory scheme for batteries, implying very high targets for collection and recovery of minerals (a 95% recovery rate for cobalt for instance)[6]. Arguably, in the longer run a transition to a circular economy is a necessary condition for the global green shift to prevail.

Finally, the remaining 20% of global emissions, mostly originating from agriculture, forestry and other land changes, also need to be catered for, requiring further innovation in those sectors, supplemented by structural changes in patterns of production and consumption, as well as policies supporting such changes.

Freeman, C. and Louçã. F. (2001) As Time Goes By. From the Industrial Revolution to the Information Revolution. Oxford University Press, Oxford

Perez, C. (2016) Capitalism, Technology and a Green Global Golden Age: The Role of History in Helping to Shape the Future, in Jacobs, M. and Mazzucato. M. (eds.) Rethinking Capitalism: Economics and Policy for Sustainable and Inclusive Growth, The Political Quarterly, Chichester: Wiley-Blackwell, p. 191-207

[3] For the sources of these numbers, see the note to Figure 2.