Piketty’s “Capital in the Twenty-First Century”

Piketty’s “Capital in the Twenty-First Century “ has got a lot of attention, and  deserves praise for its detailed presentation of data on distribution of income and wealth over the longer run.  However, the title of the book, mimicking one of the greatest classics ever in economics and social science, signals that the author has greater ambitions than just presenting statistics. He clearly also wants to comprehend what the driving forces behind – and implications of – his findings may be, and to do this a theoretical understanding of economic growth is required. So what is the theoretical perspective underlying Piketty’s reasoning?

“The second fundamental law of capitalism”

A central feature in the book is Piketty’s so-called “second fundamental law of capitalism” which postulates a relationship between the rate of growth of the economy, the saving rare and the capital-output ratio. Piketty does not show us how he arrives at this “law”, nor does he discuss the direction of causality.  Nevertheless, for 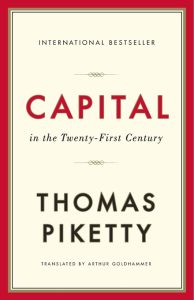 anyone who has studied growth theory, this relationship would be familiar (it has its origin in Post-Keynesian growth theory, see e.g., Pasinetti, 1974).  To illustrate the logic we will – drawing on Domar’s classical contribution in Econometrica nearly seventy years ago – show how it can be derived.  Let us assume that savings (dK) is a constant fraction (s) of output (Y):

The demand for new investments follows from the capital-output ratio “v” (which is assumed to be given):

For demand for new investments to match savings (the two dK’s need to be equal) the following needs to hold:

This is the rate of growth of the economy that secures that supply and demand match. If growth is less than this the economy will be working below its full output capacity, if it is higher there will be inflation.

As mentioned above, Piketty labels this equation the “second fundamental law of capitalism”. However, instead of using it to determine the growth rate, as the Post-Keynesian theory would suggest, he uses it to calculate the capital-output ratio for a given rate of growth. Hence, he turns the “law” on its head, without any attempt to explain the economic mechanisms at work.

“The Fundamental Force for Divergence: r>g”

Another issue is Piketty’s insistence on the proposition that the rate of return to capital (r) will exceed the growth rate.  How can that be true? Let us rephrase the issue in the formal framework just introduced. Moreover, assume – for simplicity – that there are two types of income, wages and profits (P), and that all wage income is consumed and all profits reinvested. This may not be so far from the truth since according to Piketty the rich receive most capital income and consume only a tiny part of it.[i]

Hence the theoretical framework that appears to have inspired Piketty’s reasoning is not consistent with his “fundamental force for divergence”. Rather what the theory would suggest is that the rate of economic growth and the rate of return on capital cannot be seen as independent variables (and should be expected to equalize).

Leaving this as it may it may be noted that the capital output ratio – “v” – obviously is a key parameter in growth and that Piketty is right in pointing this out. This is not a new insight, already Piketty’s great forerunner, Karl Marx, pointed to importance of this ratio, which he called “the organic composition of capital”. According to Marx competition between capitalists would, through continuous investments in new, labour saving machinery, lead the capital output “v” ratio to increase indefinitely if not checked by other factors (which he discussed in some detail). However, the inverse of the capital output ratio, Y/K, is the maximum rate of profit (when the entire value added goes to capitalists):

So as Y/K decreases against zero (as a consequence of the rising “v”), the rate of profit – and hence the rate of growth – will ultimately have to decline towards zero as well, which according to Marx would most likely lead to economic crises, bankruptcies and capital destruction. However, inter alias this would reduce the capital-output ratio and increase the maximum rate of profit. Hence, according to this theory, the crisis might by itself provide the ground for a new round of capital accumulation and rapid economic growth.

This simple story may not be incompatible with Piketty’s obervations. He shows that the capital-output ratio increased to very high levels before the First World War, but that is was much reduced during the two world wars and the crisis of the 20s and 30s, thus  breeding the ground for the post war boom (what Piketty calls the “thirty golden years”) as the Marxian theory would indeed predict.  Moreover, as Marx also would have envisaged, this process led the capital-output ratio to increase once more.

What to expect with respect to the relationship between technological progress and capital productivity is surely a key question. One way to look at this is from a perspective that views long run growth as a succession of industrial revolutions with durations of a hundred years or so (von Tunzelmann 1995). The main characteristic of an industrial revolution is the occurrence on new types of machinery, which are much more productive than previous generations and have wide applicability (hence the notion “general purpose technology” which is a much used term for this phenomenon in the economic literature, see e.g., Lipsey et al, 2005). Following this one might expect industrial revolutions to boost capital productivity, at least initially, both directly (by raising output) and indirectly (through the creative destruction of existing assets).  Therefore, if the IT revolution did not have this effect on capital productivity, as Piketty’s data may suggest, that is certainly something worth exploring further. However, to do that it may be worthwhile to distinguish between industrial and residential “capital”, as the factors affecting their valuation may not be the same.

In conclusion, Piketty’s  “Capital in the Twenty-First Century “ contains a lot of interesting information, but when it comes to comprehending what is going on, it does not live up to the expectations created by its title.  To do that, the discussion of long run growth in the book would have had to be less ad hoc and more rigorous. Nevertheless, the book has succeeded in raising many interesting questions, particularly concerning the relationship inequality and economic growth, which deserve to be explored in more depth and – not the least – discussed among economists and other social scientists.

[i] What perhaps blurs the picture is that Piketty includes residential wealth (apartments etc) in society’s capital in contrast other type of consumer durables such as cars etc. which are not included. Here I abstract from any type of such “capital”.